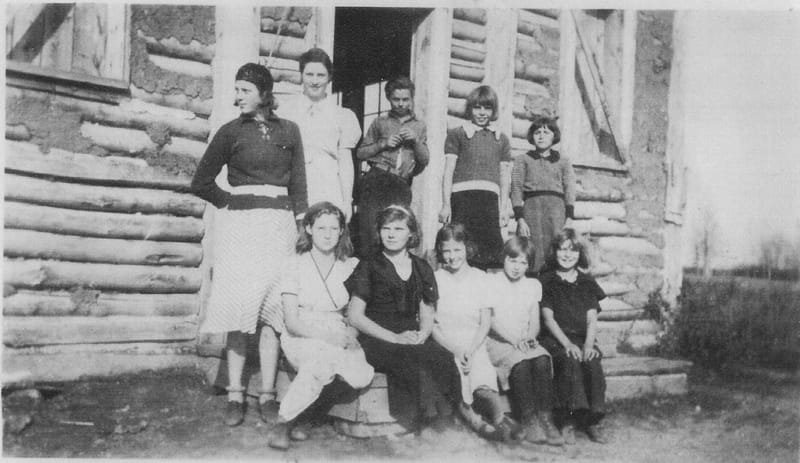 The trustees got right down to business with the Arden Leigh school district 5015 construction after the June 12th meeting.

The trustees got right down to business with the school construction after the June 12th meeting.  Mr. Sundberg, the chairman of the board, took charge of the school design and the construction process while two trustees, A.C. Chandler and William Joss assisted by organizing the volunteers and the procurement of materials. The ratepayers obviously were very cooperative and put in a great effort so that by August 24th, 1935 they were in a position to let Inspector Sparkes know that they needed a teacher for the winter term starting in March.

The author has always been impressed with the external attractiveness of the school building.  This is probably because of the proportion of the height of the walls to the width of the walls as well as the slope of the roof.  Mr. Sundberg, trained as a carpenter in Sweden, was probably aware of what is known as the golden rectangle where the length of the rectangle is 1.6 times the width. The golden rectangle in architecture is known to be “pleasing and easy on the eye”.

The building has also shown itself to be structionally sound. As of this writing the building on the cover is 84 years old and there are no sways in the roof or walls even though it has had no maintenance since 1950. Most of the reason for this continued sturdiness was the substantial foundation and the well-braced roof trusses similar to those used in construction today rather than just using plain rafters.

The Department’s expectation that the school was to be built without incurring any indebtedness means that the trustees had to be both frugal and creative.  So rather than pouring a concrete foundation, the trustees utilized rocks, which were plentiful, held together by concrete for the foundation.  Building a traditional log school was out of the question since the trees in that area were not tall enough to yield logs of sufficient length.  The ingenuity of the builders was evident when they decided to use shorter logs in 8x10 panels for the walls separated by vertical logs.  When assembling these panels, they made sure the exterior walls were flat with no protruding logs so that in the future the walls could be sided with spruce lumber.  The walls were plastered externally and internally with a clay/straw mixture.  The inside logs were totally covered with plaster so that no logs protruded while the outside logs were plastered just to fill the joints. To save costs, kalsomine, a chalklike white substance made of lime, was used to paint the internal walls and ceiling while beaver board, a hardboard made of pressed paper painted black was used for blackboards.

Another stroke of ingenuity was to place the chimney at the opposite end of the school to the potbelly stove. This resulted in the stove pipes running the full length of the ceiling, thus maximizing the heat from the stove.

The government grants were sufficient to buy the lumber for the floor joists and flooring, the ceiling, the roof trusses, the doors and the window framing.  The lumber was usually donated by ratepayers or purchased from the mills in the Porcupine Forest Reserve, thereby avoiding the retail mark-up.  Although the amount of other construction grants are not known, the startup grant of $66.66 amounts to $1200.00 in today’s dollars, a fair amount of purchasing power.

The desks were made out of hand-planed two-inch planks.  The original builder of the desks, Ludwig Kattler, procrastinated to the point were the board passed a motion that John Sokolowski remove the lumber and materials from Mr. Kattler because he “has had same for the past six months and does not seem capable of finishing the work”(November 26, 1935). The desk materials were taken to Alf Mitchell and Wm. Joss who finished the job.

Construction was finished by early winter 1935, although there was a bit of a hold up in construction after some of the windows were stolen.  The board contacted R.N.W.M.P. (Royal North West Mounted Police) on November 26th, 1935, but were told by the constable just before Christmas ”nothing can be done until something more definitive turns up”, even though the residents had told the police that they suspected the installer.

A teacher, Mrs. Helen Cook, was hired on February 27th at a salary of $350 for the school term with an advance for board and lodging.  While Mrs. Cook lived with Hemricks which was a mile away from the school, others choose to live with Kattlers about ¾ mile from the school or with Clarks, a stone’s throw from the school. The school opened on March 4th, 1935 since it was common practice for boards in those days to set the school year from March until the end of November thus missing the two coldest months of the year.  To facilitate the school opening Dad lent the school a table suitable for the teacher’s desk while Grandpa loaned a grandfather clock.

Read More
I BUILT MY SITE FOR FREE USING